The brain is a complex organ composed of billions of neurons connected through excitatory and inhibitory synapses. Its structure reveals a modular topological organization, where neurons are arranged in interconnected assemblies. The generated patterns of electrophysiological activity are shaped by two main factors: network heterogeneity and the topological properties of the underlying connectivity that strongly push the dynamics toward different brain-states. In this work, we exploited an innovative polymeric structure coupled to Micro-Electrode Arrays (MEAs) to recreate in vitro heterogeneous interconnected (modular) neuronal networks made up of cortical and hippocampal neurons. We investigated the propagation of spike sequences between the two interconnected subpopulations during the networks’ development, correlating functional and structural connectivity to dynamics. The simultaneous presence of two neuronal types shaped the features of the functional connections (excitation vs. inhibition), orchestrating the emerging patterns of electrophysiological activity. In particular, we found that hippocampal neurons mostly project inhibitory connections toward the cortical counterpart modulating the temporal scale of the population events (network bursts). In contrast, cortical neurons establish a larger amount of intrapopulation connections. Moreover, we proved topological properties such as small-worldness, degree distribution, and modularity of neuronal assemblies were favored by the physical environment where networks developed and matured. For more information here.

On the road to the brain-on-a-chip. A review on strategies, methods, and applications

The brain is the most complex organ of our body. Such a complexity spans from the single-cell morphology up to the intricate connections that hundreds of thousands of neurons establish to create dense neuronal networks. All these components are involved in the genesis of the rich patterns of electrophysiological activity that characterize the brain. Over the years, researchers coming from different disciplines developed in vitro simplified experimental models to investigate in a more controllable and observable way how neuronal ensembles generate peculiar firing rhythms, code external stimulations, or respond to chemical drugs. Nowadays, such in vitro models are named brain-on-a-chip pointing out the relevance of the technological counterpart as artificial tool to interact with the brain: Multi-Electrode Arrays (MEAs) are well-used devices to record and stimulate large-scale developing neuronal networks originated from dissociated cultures, brain slices, up to brain organoids. In this review, we will discuss the state of the art of the brain-on-a-chip, highlighting which structural and biological features a realistic in vitro brain should embed (and how to achieve them). In particular, we identified two topological features, namely modular and three-dimensional connectivity, and a biological one (heterogeneity) that takes into account the huge number of neuronal types existing in the brain. At the end of this travel, we will show how "far" we are from the goal and how interconnected-brain-regions-on-a-chip is the most appropriate wording to indicate the current state of the art. For more information here. 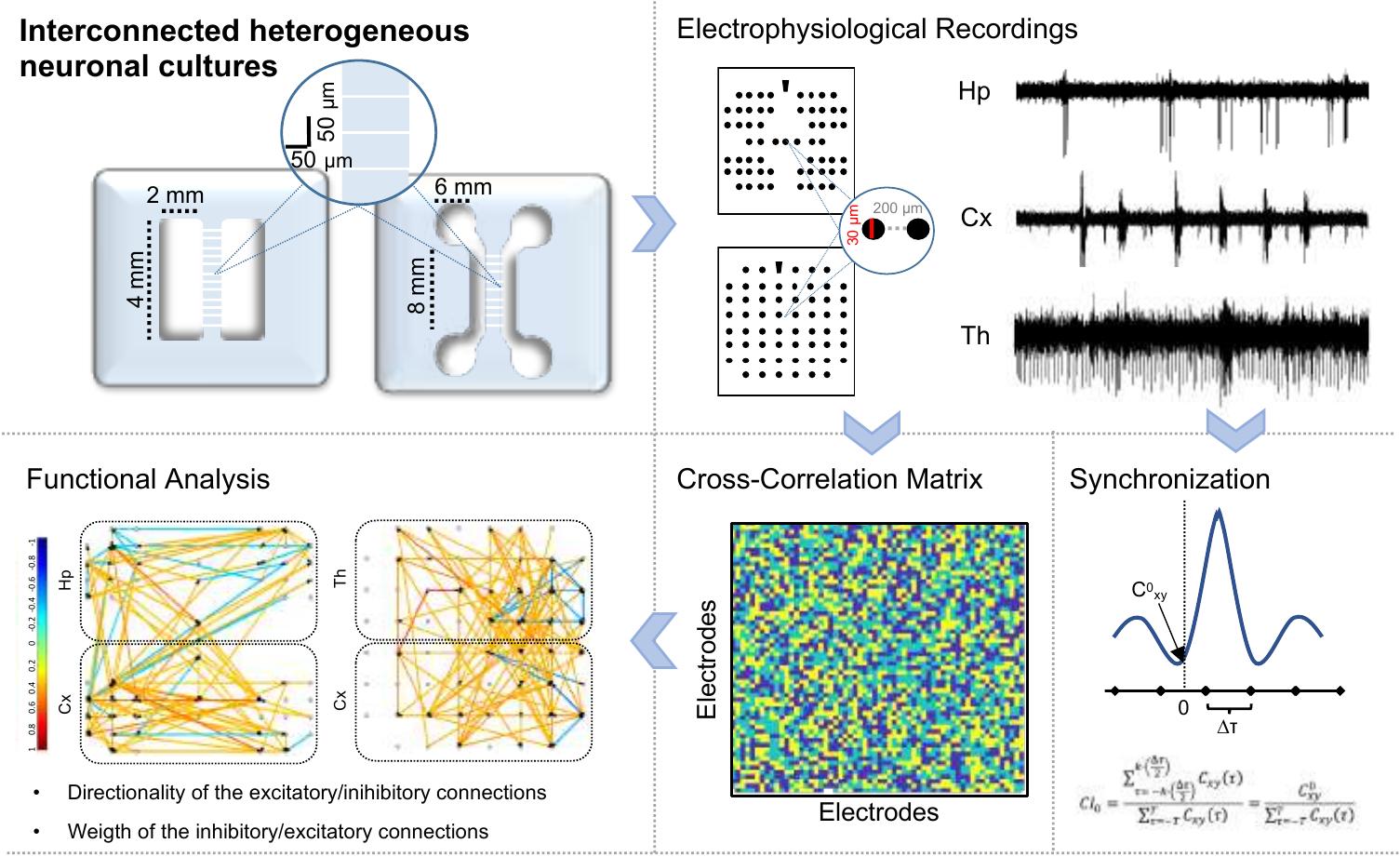 The huge connectivity of the brain and the cellular diversity, which characterize the neuronal populations in the different anatomical districts, are considered two of the main sources originating the complex patterns of electrophysiological activity. Despite the advancements in neurotechnologies, which allowed investigating the brain complexity with a high level of precision, the use of simplified in vitro brain-on-a-chip models results to be a widespread alternative. In the present work, we used an in vitro brain-regions-on-a-chip model to explore the role of thalamic and hippocampal neurons in modulating the dynamics of cortical ensembles. We recorded the emerging electrophysiological activity by means of Micro-Electrode Arrays (MEAs) paired with ad hoc polymeric structures in order to recreate interconnected heterogeneous networks. We demonstrated that two specific neuronal inputs (thalamic and hippocampal) modulated cortical dynamics differently. The observed variation in the cortical activity was sustained by a specific reorganization of the functional inhibitory connections with respect to the cortical homogeneous controls. In perspective, the possibility to design in vitro specific interconnected brain-regions-on-a-chip and to record their electrophysiological activity could be an alternative approach to investigate neurodegenerative pathologies affecting the connectivity among different neuronal populations. For more information here.

Three-dimensionality shapes the dynamics of cortical interconnected to hippocampal networks 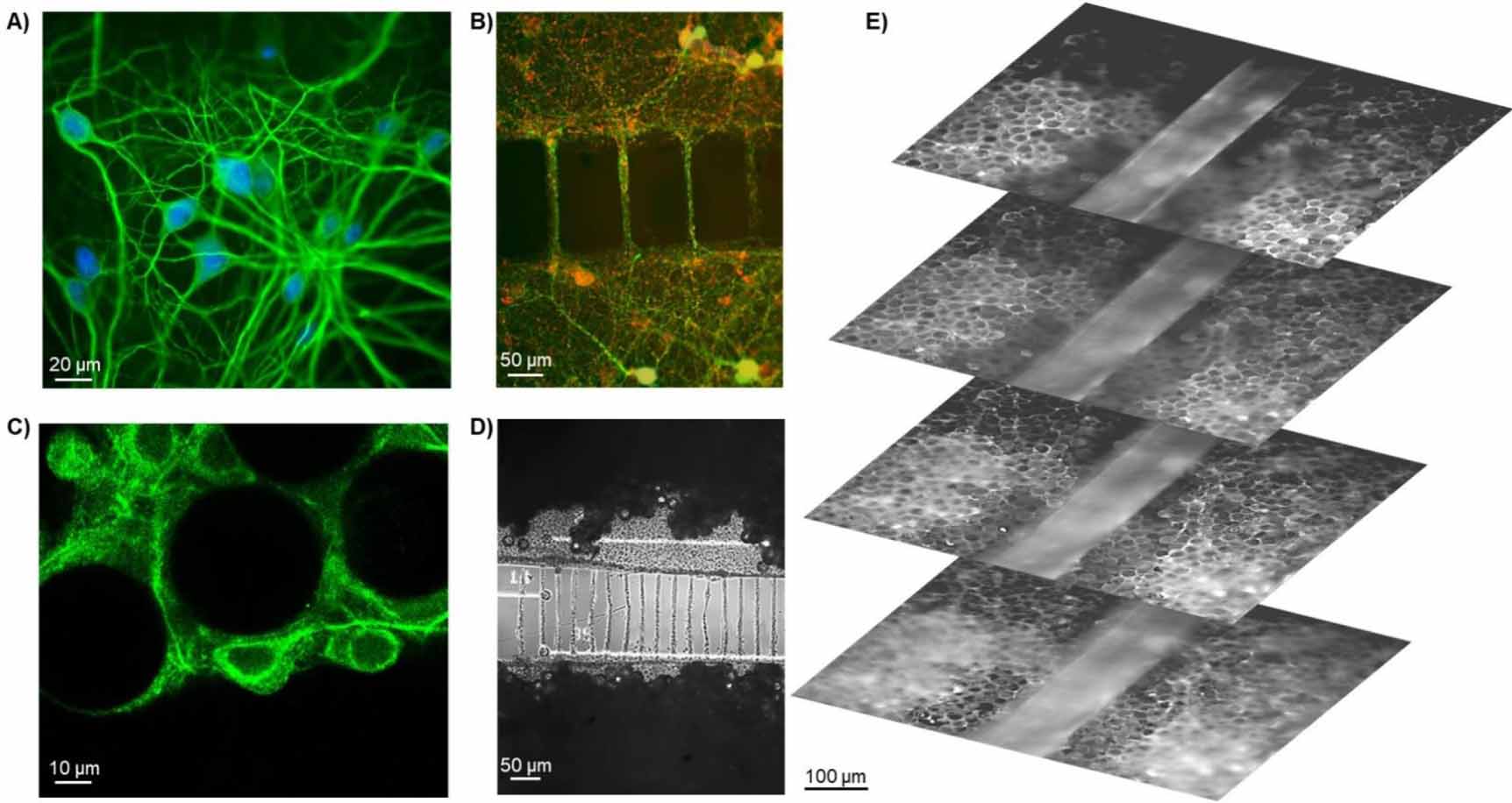 Objective. The goal of this work is to develop and characterize an innovative experimental framework to design interconnected (i.e. modular) heterogeneous (cortical-hippocampal) neuronal cultures with a three-dimensional (3D) connectivity and to record their electrophysiological activity using micro-electrode arrays (MEAs). Approach. A two-compartment polymeric mask for the segregation of different neuronal populations (cortex and hippocampus) was coupled to the MEA surface. Glass microbeads were used as a scaffold to mimic the 3D brain micro-architecture. Main results. We built a fully functional heterogeneous 3D neuronal network. From an electrophysiological point of view, we found that the heterogeneity induces a global increase of the activity rate, while the 3D connectivity modulates the duration and the organization of the bursting activity. Significance. In vivo, studies of network dynamics and interactions between neuronal populations are often time-consuming, low-throughput, complex, and suffer from reproducibility. On the other hand, most of the commonly used in vitro brain models are too simplified and thus far from the in vivo situation. The achieved results demonstrate the feasibility to build a more realistic and controllable experimental in vitro model of interconnected brain regions on-a-chip whose applications may have impacts on the study of neurological disorders that impair the connectivity between brain areas (e.g. Parkinson disease). For more information here.